Many Lamps, One Light 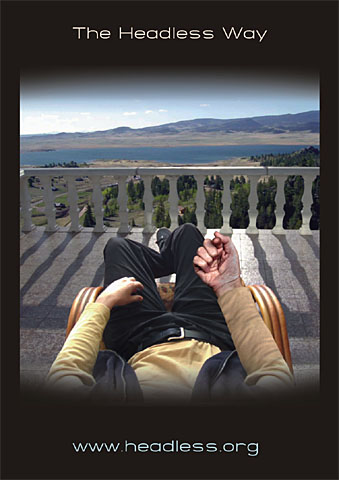 While sitting on the deck I am constantly reminded of Sam Blight's picture of the Headless Way. Though the view is different the open space is clearly the same clear view without obstruction. The view here is looking out at the desert from open space. When the focus returns to what is looking all is perfect, completely free, and with it the experience of instantaneous peace.  (The peace is constant, just overlooked with the busy-ness of looking outward.)  Samantha.

After I had been involved with Seeing for about eight years I got into Vipassana meditation. I attended a retreat, then a few months later went to live at the meditation centre in England. The director was Dhiravamsa, a Thai man who had been a monk for many years, but left the order to work outside that structure. He combined sitting with dance, chanting, groupwork, bioenergetics, and lots more. This was in the late seventies. Up to this point I had focused on 'headless' workshops - I went to them all the time, read everything of Douglas Harding's I could get my hands on, helped lead workshops. I was completely absorbed into it. My three years at university were spent primarily studying this rather than History!

The retreat with Dhiravamsa was a different 'approach' and really affected me. It touched me in ways that Seeing had not. There was a different angle on things here which felt important. Realising that I needed to explore further, I returned to the meditation centre a few months later. And after being there for several months I began a year long training in the retreat work, and then spent three years leading retreats.

But it wasn't until the end of this four years that I was able to formulate a way of understanding how these two ways related to one another, and how I related to them, though I felt right with them both. I expressed my understanding in an image. First I drew two circles, one representing Vipassana and the other Seeing. They were distinct, separated objects. Which was me? If I was in one I wasn't in the other. This was my conflict - which did I identify with, which did I 'follow'?

Then I drew another image -- a large circle surrounding a small circle, like a donut, and divided the 'donut' into sections. One section was Vipassana, another was Seeing. There were other sections too, representing other aspects of my life. I realized I was the empty place in the middle -- I wasn't in any of these sections or 'groups'! They were all in me. I didn't have to choose between one 'way' and another. I could take in aspects of all of them.

At the same time my view out was unlike anyone else's - the things I valued were my own unique combination and development. My two major spiritual influences at this point (apart from Christianity) - Douglas Harding and Dhiravamsa - had their own views out - views which profoundly influenced me. But I was in the process of finding my own point of view and individuating from them.

This was also a process of integration. The integration came by finding the space where there was room for both - and the other things too. What integrated the different 'ways' was the space. Up to this point I think I had been identifying the 'space' with either Seeing or Vipassana. But now I recognised that there was a difference between the 'way' (which included all the forms, from sitting to the experiments) and where the 'way' led. And where they led was the property of none of the paths that led there.

So I sit, practice tai chi, sometimes point a finger, do other experiments when I am in a workshop. I can appreciate the differences and similarities between Seeing and Vipassana, but find it hard to say where one stops and the other begins. And where both of these stop and the rest of life begins! R.L. UK

Thanks for the response on Vipassana and the Headless Way. It's helpful to know that others find themselves responding to many traditions. I originally approached this form of meditation (Vipassana) as a form of therapy for stress. It's helped with that to some extent, but more than that, it's helped me get in better touch with my life, moment by moment. One of the advantages of this approach, for me, is that it provides a simple and clearly structured practice, a kind of sitting ritual to follow. One of the things that appeals to me about Harding's work is its complete absence of this very thing. But then I never claimed to be consistent. T. USA

I think of it in two ways. Headlessness as a form, an expression, a signpost home to Oneself is definitely not the only way. Anyway, headlessness as form I'm sure is different for each person. I celebrate the infinite variety of forms, and the authority of each being as to their own perspective.

On the other hand, the experience of headlessness I believe is the same for all - I mean now the view in to the Source. That is my belief, my conviction - which is usually affirmed when I ask people what they find when they look within, look at the place where others see their face. And of course the headless experience itself is simply self-evidently unbounded and belonging to all. In this sense it doesn't matter at all if others agree or not. R.L. England.