Viewed from the other planets in the Solar System, I who am no-thing here at centre manifest over there as Earth, a beautiful, small blue planet orbiting the sun between Mars and Venus. I am at just the right distance from the sun to support Life - neither too far away (which would mean freezing to death), nor too close (which would mean burning to death). In addition I gyrate as I orbit, preventing any one area of my body from always being in the light or dark, heat or cold. There are seven other major planets orbiting the sun with me, a family whose members are different in size, shape, temperature and composition. The sun, feeding me constantly with light, heat, cosmic rays and gravitational energy is the source and sustainer of my life. A moon orbits me - it probably formed from the debris of a small planetary body colliding with me early in my life.

I was born about 4.5 billion years ago as the Solar System formed from a cooling star. Made of very hot, molten rock I gradually developed a crust and an atmosphere. Relatively complex molecules formed in my shallow seas and about 3.5 billion years ago these evolved further into simple cells. These in turn developed into multi-cellular organisms some of whom emerged from my oceans onto dry land. Humans are a very recent development in this long evolutionary story, their ancestors first appearing only about 3.5 million years ago. Humans are not alien to me but are myself, the Earth, sprouting hands and feet and eyes - thus enabling me to write this brief description of my own birth and development! 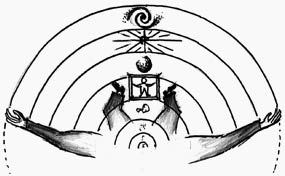 Looking out from my central capacity I see my body and then the rest of Humanity. Looking further I find the surrounding layer of Life which is itself surrounded by the planet, the ground from which Life emerged and upon which it depends. There is no absolute dividing line between myself and the Earth. 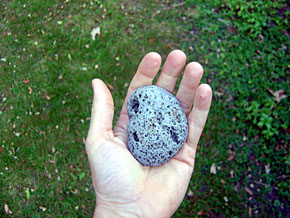 Holding a stone in my hand, my single Eye is capacity for both. The Earth is my extended body.

Becoming The Other Planets

Looking beyond Earth's physical horizon I am capacity for my neighbours. Just as at the human level my friend's face is given here in the absence of my human face, so at the planetary level the faces of the other planets are given here in the absence of my planetary face. Here for example (in the photograph on the right), I vanish as Earth and become Mars.


Earth and Moon viewed from Mars

Identifying With The Earth

I have no trouble identifying with my planetary body. If for example I heard that a large asteroid was hurtling towards the Earth I would feel threatened. Wherever it landed it would land here on my body. In some way I would feel the impact. Martians arriving on the other side of the planet would be arriving here. In that moment my sense of self would expand from the human to the planetary level. Being no-thing at centre I am not confined to my human identity but am infinitely flexible, effortlessly growing beyond my human boundaries when the occasion calls for it, and effortlessly contracting again when the need falls away. My dramatic transformations are hidden from myself only if I refuse to acknowledge them. If as a human being I am certain I am the highest form of life then I blind myself to higher levels of my own being.

Levels Are Not Separate

Copernicus the adult leaping out of himself to see his Earth self from the sun's viewpoint, and Copernicus the child leaping out of himself to see his human self from his playmates' viewpoint, are the same person making the same discovery about himself, and growing by the same means, at different levels of the personality. The Hierarchy of Heaven and Earth, Douglas Harding.
Earth from Space - Video

Go to My Solar Identity - The Sun