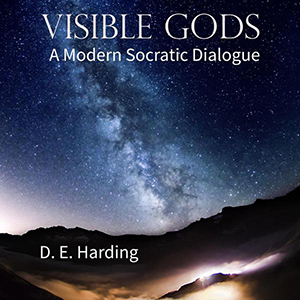 After Faber & Faber published his great book, The Hierarchy of Heaven and Earth, in 1952, Douglas Harding returned to practising architecture – very successfully - after a break of more than ten years. However, though Harding was now designing buildings again, he didn’t give up writing – he didn’t stop trying to share with the world his message about who we really are. In 1955 he finished Visible Gods – a highly readable, amusing and inspiring book that takes the form of a dialogue between Socrates and several fictitious modern-day thinkers. It contains many of the ideas of The Hierarchy in a new and very digestible form. Harding did not succeed in publishing Visible Gods, so it is with delight that we do so now.

Visible Gods takes the form of an imaginary dialogue between Socrates and several fictitious modern-day scientists. Socrates’ world-view is of a living cosmos with man only half-way up the tree of life; above him reign suprahuman beings of great majesty and power – the visible gods. The scientists with whom he converses disdain his ancient Greek cosmos as primitive and false. Yet as Socrates questions them, in typically ironic fashion, about the discoveries of science, it’s not at all clear that the scientists’ view of “a dead universe populated here and there with rare accidents of life” is right. Indeed, the more they argue their case, the more Socrates shows they are arguing his…