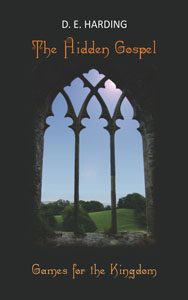 ‘The Hidden Gospel’ presents an exciting new interpretation of the teachings of Jesus. In this workshop manual Douglas Harding invites you to do his breakthrough experiments and experience, directly, the Reality that Jesus was talking about.

Harding had a deep feeling for Jesus. Born in 1909, Harding was brought up in a fundamentalist Christian sect, the Exclusive Plymouth Brethren, whose members put Jesus at the centre of their lives. Though he left the Brethren when he was 21, rejecting their narrow dogmatism and intolerance, Harding knew the Gospels like the back of his hand, and retained a profound love and respect for Jesus. He admired him for so courageously living and speaking the truth, even in the face of death: the truth that we are both human and divine.

In the early 1940s, after years of enquiry, Harding suddenly saw who he really was in a modern scientific way – he saw that, though he appeared human at six feet, at zero distance he was nothing at all. Nothing full of everything. Then in the late ‘60s Harding invented his experiments – awareness exercises which physically point at what we are at zero distance, the boundless, timeless Reality behind all our appearances. They make the experience of our central Reality – the Ground of Being - available to anyone willing to look. They are a scientific response to the spiritual question, ‘Who am I?’

It was natural that at some point Harding would combine the ancient teachings of Jesus, so influential in his life and in Western civilization, with his experiments – with modern science - for science had led him to the Reality that Jesus lived and died for. In ‘The Hidden Gospel’ Harding showed how the teachings of Jesus made sense in scientific terms – including some teachings that sound plainly untrue, or at best metaphorical. When Jesus spoke about having a single eye and of his body being full of light, what did he mean? Anyone looking at him would have seen he had two eyes and his body was not made of light. But carry out Harding’s ‘single eye’ experiment and within a few moments all is clarified, not through debate but by seeing – seeing that your eye is single, that your body is made of light. Now the words of Jesus make sense.

Although ‘The Hidden Gospel’ introduces a modern interpretation of Jesus, giving him a new voice in today’s world, hopefully it will reach people beyond the Christian world – and therefore play a part in resolving some of the religious conflict in our world. As well as demonstrating where the findings of science and the goal of Christianity meet – in our central Reality, in the indivisible Ground of Being – in principle it demonstrates where science and all religions meet. The experiments make it possible for anyone to see and consciously be in the Centre, in the place from which we can view our religious differences – or any other differences - but not be caught up in them. Given the conflict flowing from the clashes between religions, a growing awareness of the unity that exists beneath our differences is an urgent priority.

The Hidden Gospel, completed in 1974 but published now for the first time, is for anyone, from whatever tradition, who wishes to find out what Jesus really meant, not by debating his teachings but by experiencing for themselves the boundless core of their own being, and then seeing how clearly and beautifully Jesus described this experience, this Reality. This book does not appeal to Jesus as a religious authority who tells you what to believe but as a fellow traveller who found ‘the pearl of great price’ and, with great courage, did his best to share it with others.