See a video presentation of this experiment

If you point at your face and turn round on the spot, other people will see you moving whilst the world around you stays still. 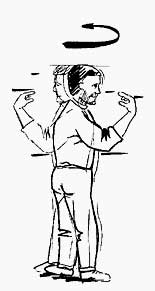 Is your own experience the same, or different? Could it be that the world is moving whilst you remain still?

If so, this would indicate that your deepest identity is divine rather than human.

Let’s test this. Stand up, point back at your no-face – where others see your face - and for a few moments slowly and carefully turn round. (Stop if you feel dizzy!)

You can see the room moving beyond your finger. Do you see any movement your side of your finger? 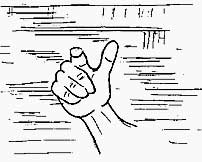 
You can choose to be aware of your inner stillness – your inner divinity – anywhere: walking down the street (the houses are moving), cycling, driving…

At the heart of all the movement in your life is stillness, and being aware of this stillness is relaxing. This still, awake capacity is free of stress. There is nothing here that can become tense – even in the midst of the most difficult situations. (How could capacity be stressed by anything?) You can rest here – it’s more stable than the Earth here.

Consciously include this stillness in your life. Enjoy this inner peace wherever you are.


Continue with another experiment


Douglas Harding:
When you get in your car, just look and see what is moving. Be truthful. See that what you are in fact driving is not the car but the world. You are driving the universe. Aristotle, the Greek philosopher, defined God as the unmoved mover of the world. Well, by grace, this is what you are. Gosh! The awesome truth of this. This is meditation. Meditation for me is meditation for life, for the marketplace. Highly practical. You say, is it practical? Yes it is. If you do a lot of driving I recommend this to you. If you want to drive well and without tension and with pleasure, and without tiring yourself very much or at all, drive England, drive France. Much better than driving your Clio. This is so practical, you see. I do recommend it. It's childlike, it's obvious, it's fun too. You see this thing is so amusing, entertaining. If you want to be entertained, if you want to discover that God Almighty has a terrific sense of humour, then come home and enjoy the humour. Do it! Test it! Don't believe a word I put out. Don't believe any of it. Just is it true? Am I mad, am I talking rubbish, or is it true? And if it's true, try it, give it a whirl. As Eckhart said, what have you got to lose by giving it a whirl? I think you will find that it is intensely, 100% practical.

From an interview with Douglas Harding.


Other Quotations
The outward man is the swinging door; the inner man is the still hinge. Eckhart

Whoever says that the Tathagata goes or comes, sits or lies down, he does not understand the meaning of my teaching. Diamond Sutra

The Qutb (Pole) is he who turns round himself; round him is the revolution of the heavenly spheres. Rumi

When I cross the bridge, it is the bridge that flows, not the water. Zen Saying

For a long time I used to walk round the Kaaba. When I attained God, I saw the Kaaba walking round me. Abu Yazid Al-Bistami, circa 870 A.D.

Why do you think that you are active? Take the example of your arrival here. You left home in a cart, took a train, alighted at the railway station here, got into a cart there and found yourself in this Ashram. When asked, you say you travelled all the way here from your town. Is it true? Is it not a fact that you remained as you were and there was movement… all along the way? Just as those motions are confounded with your own, so also are all other activities. They are not your own. Ramana Maharshi

As we rush, as we rush in the Train,
The trees and the houses go wheeling back,
But the starry heavens above the plain
Come flying on our track. James Thomson

At the centre, where no-one abides, there this light is quenched… for this Ground is the indivisible stillness, motionless in itself, and by this Immobility all things are moved. Eckhart

And every Space that a man views around his dwelling-place
Standing on his own roof or in his garden on a mount
Of twenty-five cubits in height, such space is his Universe:
And on its verge the Sun rises and sets, the Clouds bow
To meet the flat Earth and the Sea in such an order'd Space:
The Starry heavens reach no further, but here bend and set
On all sides, and the two Poles turn on their valves of gold;
And if he move his dwelling-place; his heavens also move
Where'er he goes, and all his neighbourhood bewail his loss.
Such are the Spaces called Earth and such its dimension.
William Blake

If they ask you, 'What is the sign of your Father in you?', say to them, 'It is a movement and a rest'. The Gospel of Thomas.

Comments Several years ago Douglas Harding was giving a workshop in Ireland. A friend was talking with him during a break.

“Douglas, you are in your eighties now, and you travel the world so much of the time, yet you don’t seem to get tired!”

In the workshop there was a man on my right who several times said how important being still whilst the scenery moves was to him. I was very touched by him… I got the participants to do the spinning experiment - and let them do it for ten or fifteen minutes. It was a strong experience for many of them. How simple and accessible, how shareable, this headlessness is. One of the participants went home after the Friday evening and showed his wife. R.L. UK.

I was one of those participants that did the "spinning experiment - for ten or fifteen minutes. It was a strong experience for many of them, including myself. I was struck my the fact that after spinning in a circle for such a long time I had no experience of dizziness whatsoever! The body/mind lost its domination over where I look out of. This happened several times, during several experiments which brought me back home. G. USA

I’m living in Amsterdam. I came across the headless way about 3 years ago when I attended a two-day seminar Douglas gave near Nice, in the South of France. The finger-pointing exercise literally blew my head away, and the closed-eye one finished me off. I hadn’t expected anything from the seminar. The name Douglas Harding was familiar: I had read something about him in a book by Colin Wilson called Beyond the Occult. Wilson quotes the famous passage from the beginning of On Having No Head and then goes on to say that that’s all very well but its probably the kind of emptiness and simplicity experienced by cows in a field! Well, I thought perhaps I was in for an entertaining lecture on Zen Buddhism. I was in no way expecting to be literally decapitated. It was difficult not to burst out in peels of laughter during the rest of the seminar. That night, and every night for about the next 3 weeks, I found the in-seeing - awareness of oneself - to be so interesting and absorbing, so perfect and complete, that going to sleep seemed an absurdity. I lay awake for hours - just staying with the seeing and the realisation of what this all means.

Since then, seeing has become less intense but has remained constant. It took a little while to ‘get’ the assertion that it is the world and not I that moves. Now its a tremendous thing to cycle around this beautiful city and see, beyond all doubt, that it’s Amsterdam that flies by while ‘I’ am this awake unmoving stillness. The way close objects like the road beneath ones feet flash by and more distant things like buildings and trees float past gracefully is a spectacle I never tire of. This has certainly become my favourite exercise. J.R. Holland

We did the test in which you point at yourself, and spin around your own axis. This reminded me of an experience I have with aikido (a martial art). Two or three times a week, I practice aikido. At some moments, I had two difficulties during my practice: one was that, when I trained with some people, I felt a kind of fear when somebody ‘attacked’ me, so that my body became tense and stiff, which hindered carrying out the technique. Another problem was that I sometimes became dizzy, because there is a lot of tumbling around in aikido. These problems vanished into thin air, when I reminded myself of the Void I am. When somebody attacked me, I felt relaxed, because who was there to attack? When I had to tumble around, I did not feel dizzy anymore, because there was no one here to feel dizzy, and besides, there was only a stillness in which the world turned around, not me. M. Belgium

On the way home, driving the van in and around the town’s streets, aware of the traffic and the road lights, concentrating. Then, down the slip road and onto the quiet of the motorway. No street lights and at this time of the evening not much traffic, just gently cruising along, watching the white lane markers come and go, in and out of the area lit up by the headlights.

Nothing’s coming the opposite way. Or, maybe there is - I’m just concentrating on a patch of darkened road just ahead of the beam of my lights. My mind’s in an ‘automatic pilot’ mode. The gentle green glow of the dash lights soothes my eyes and highlights my hands on the steering wheel leaving the remainder of the van as a backdrop of dark velvet.

Driving along a relatively straight section of the motorway requires little movement and leaves me feeling relaxed, which after a while leaves me with only an awareness of my hands, giving the feeling of being disembodied or disassociated from them. Maybe they’re someone else’s!

This stillness of my self within me contrasts with the mesmerising hurry of the road, coming rushing into the pool of light from the front and blurring, flowing, around the van and past me. I have no awareness of my body, just my hands. There is just ‘me’. Looking out. Like viewing the world through some 3-dimensional window, protected from the environment outside. A third party. Stillness is me, with my awareness looking out.

There you go... that’s an attempt to describe a particular experience I associate with ‘headlessness’. I.K. UK

Whilst jogging this morning, I decided to walk a while backwards to watch that beautiful sunrise over the Alpines. And suddenly, surprise, surprise (ok - maybe not for you "long-time seers" but for me!) I realised how the road floated out from here, how the space here gave birth to the hills over there, to the mountains, the sun ....... how creative this space is, how, how...... AMAZING! S.C. Germany.